Nationalist Parties on the Rise in the British Isles Post-Brexit

Undoubtedly, Britain’s exit from the European Union has been controversial since the initial referendum in 2016. The government’s approval rating has fluctuated wildly over time, largely because the process was drawn out over four years and involved three changes in parliamentary leadership. Many attribute Brexit to a rise in nationalism, particularly Euroscepticism, which grew in Britain throughout 2016. Now that the United Kingdom is officially leaving the EU, nationalism is on the rise again. This time, however, the sentiment is growing more regionally – not only in England, but in unique ways throughout Northern Ireland, the Republic of Ireland, Scotland, and Wales. Results from the most recent elections in the UK and the Republic of Ireland suggest a growth in support for each area’s respective nationalist parties.

In late 2019, the Conservative Party, (colloquially known as the Tories), won a solid majority in the British government, improving on their performance in the 2017 election with a now 80 seat majority. The election assured Britain’s exit from the European Union on January 31, 2020 under Prime Minister Boris Johnson’s deal. Conservatives and a British nationalist support for Brexit has led to what many describe as economic and political challenges for other members of the UK, particularly Northern Ireland and Scotland, who in the 2016 referendum voted to “Remain” in the EU. Nationalist parties across Scotland, Ireland, and Wales are generally opposing the Conservatives and other Brexit supporters, and are aiming to leverage strong voting results in the 2019 election to bolster their legitimacy. 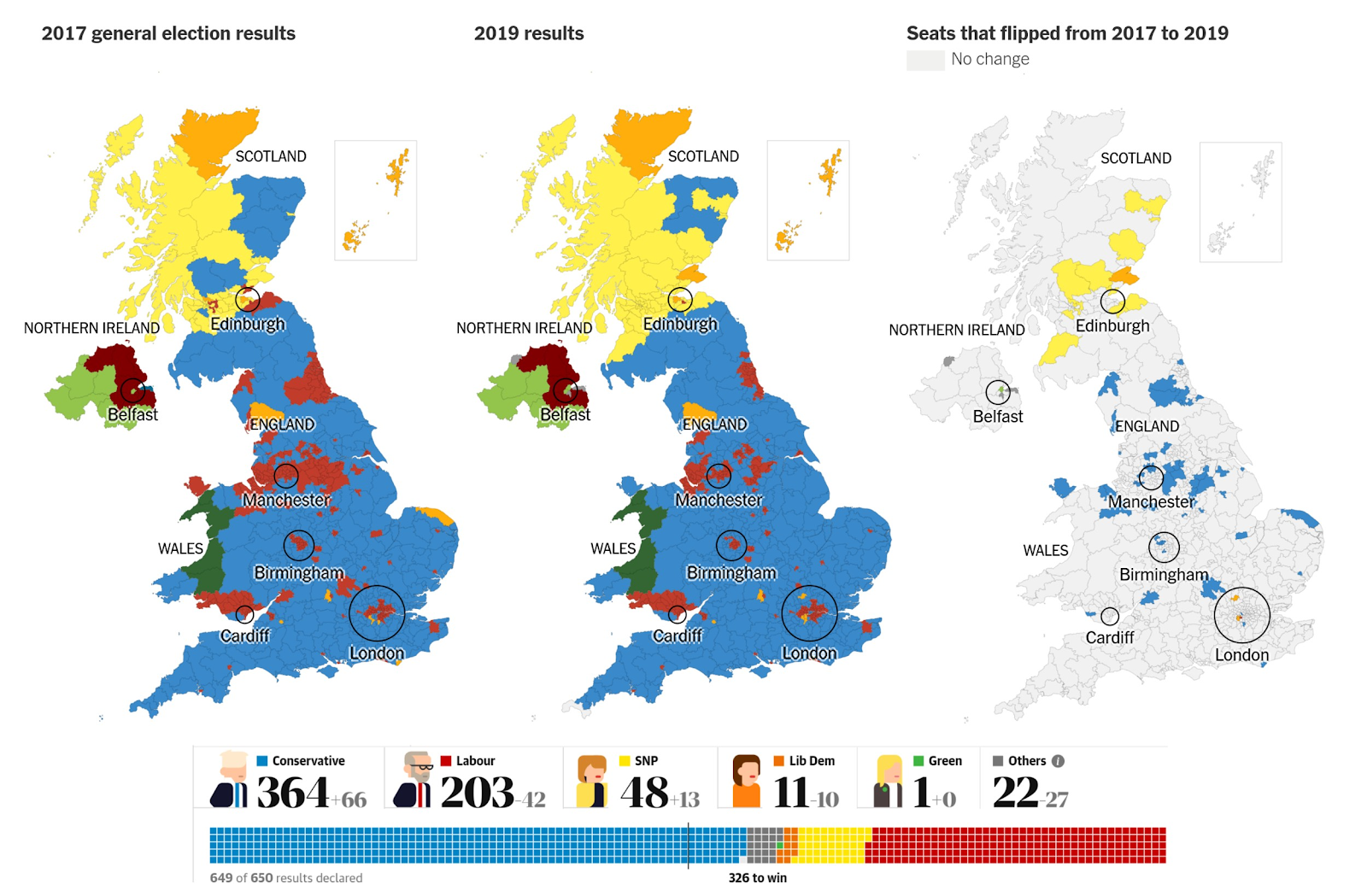 The Scottish National Party (SNP) also performed better in 2019 compared to the previous election, gaining 8.1% more of the vote since 2017 for a total of 48 out of 59 seats in Scotland. Following the election, Nicola Sturgeon, First Minister of Scotland and SNP Party Leader, believed these votes presented a “clear message”  and “endorsement” that Scotland should look into another independence referendum and “not have [our future] decided for us.” In January 2020, however, Prime Minister Boris Johnson rejected a call for a Scottish referendum, claiming it would “continue political stagnation.”

The SNP has sought a new way to express Scottish nationalism. While the term nationalism has historically held negative connotations for some, particularly on the basis of culture and homogeny, the SNP has attempted to define Scottish nationalism as accepting of immigration and Scottish minorities. In February of 2020, The SNP supported the Scottish Government’s pledge to help migrants in need. The SNP’s representative for Glasgow Central stated, “the commitment by the Scottish Government to developing an anti-destitution strategy is a significant step. It underlines Scotland’s commitment to building cohesive communities and recognizing and valuing diversity.” These comments were in opposition to “Tory UK” immigration policy that some believe will prioritize high-skill and strongly-UK connected immigrants, restricting pathways for less skilled or educated immigrants. Some parties in Scotland are calling for their own ability to shape local immigration, which could include the creation of a unique Scottish Visa. Combined with more pro-European sentiment in Scotland, the latest wave of nationalism is promoting pro-Scottish, anti-Tory, and pro-EU views.

Meanwhile, the Welsh nationalist party Plaid Cymru, while somewhat less bullish on independence than those in Scotland, has still maintained its strength in the House of Commons. In the 2019 election, Plaid Cymru neither lost nor gained seats, but managed to win at least one highly contested district. Adam Price, leader of Plaid Cymru, stated in an interview in 2019, “[Independence] is now up to 30% in many polls… the exciting potential that’s there, both in terms of our green industrial revolution, in terms of our politics as well you know we would be better off of course trusting ourselves, taking responsibility for our nation rather than trusting Westminster governments.”

Welsh youth organizations promoting alternative nationalism have gradually grown over the past century as well, challenging the British rule in Wales and seeking to revive Welsh language and culture in younger populations. Historically, Welsh independence has only polled at around 10% approval. Contrary to Price’s claim, however, only one poll indicates around 30% popularity for independence, and was conducted by YouGov on behalf of Plaid Cymru in September 2019. The conclusion remains that Welsh nationalism is likely on the rise, particularly with calls to action for younger voters, but independence is not yet widely supported outside of the Plaid Cymru party.

Similarly, The Republic of Ireland and Northern Ireland have played complex roles throughout Brexit and in the elections following Britain’s leave from the EU. On February 8 2020, the Irish nationalist party Sinn Féin took the lead with first preference votes in the Republic of Ireland’s general election. While it is unlikely for them to achieve a majority, it is also challenging for other major competing parties to form one as well – likely resulting in the need for a coalition government. Preliminary tallies suggest Sinn Féin could win 36 seats, an increase from 22 in the previous parliament, with a notable showing of support from younger demographics. The Sinn Féin party’s name means “We Ourselves” and signifies Irish sovereignty, but had a controversial history with the Irish Republican Army during the Troubles. Sinn Féin has since rebranded in order to distance itself from the controversy, but still holds reunification as a core part of their platform. In addition to its support for Irish independence and unification, the Sinn Féin generally approves of Ireland’s admission to the EU.

Northern Ireland is changing as well, though it still maintains a pro-UK majority. The Democratic Unionist Party (DUP), which supported Theresa May’s government, lost two seats in the 2019 general election, leaving them 10 seats in Parliament. Sinn Féin, while not the majority party, maintained 7 seats – equal to its 2017 result. While many believed both parties suffered losses in the election, one bright outcome for Sinn Féin was winning a significant seat in North Belfast held by the DUP’s Deputy Leader. The DUP and Sinn Féin were on opposing sides of the Brexit referendum as well, with the DUP backing “Leave” and Sinn Féin backing “Remain” in the EU. Victories amongst smaller parties in the 2019 election indicates a region in flux. While strong results in the Republic of Ireland and a continuous presence in Northern Ireland are positive for the Sinn Féin, collaboration with other parties will be required in both areas. Sensitivity still remains regarding the Troubles and reunification, and few other parties are willing to act on the subject. At the end of the day, the results of the two elections will provide a bigger platform for this Irish nationalist party and could spark insecurity amongst competitors, particularly the DUP.

The rise in nationalist parties across the UK has revived the question of what it means to be British, Irish, Scottish, and Welsh. While nationalism and independence grow at varying rates and can mean different things for each group, this dialogue has increased in a post-Brexit United Kingdom. Both the SNP and Sinn Féin supported remaining in the EU in 2016, a sentiment which weighs heavily on their responses to Tory policy in Parliament at Westminster as Boris Johnson navigates an independent Britain. Younger demographics, as well, were key voters for both Plaid Cymru and Sinn Féin in 2019 and 2020, which could suggest a growth in nationalist parties through youth political engagement. Conservatives in England are calling for a unified UK, but conflicting opinions from Scottish and Irish parties may make that difficult, as the SNP and Sinn Féin begin paving their political influence with newfound growth in 2020.

View all posts by Anne-Marie Downey