Even when SpaceX is not launching Teslas into orbit, buying small towns in Texas, or synchronizing rocket booster landings, it continues to push boundaries. Most of SpaceX’s revenue comes from launching satellites and other cargo for its commercial customers. On May 30, the company launched its Crew Dragon capsule and successfully ferried two NASA astronauts to the International Space Station (ISS). This launch, the first time that a private company has put American astronauts into orbit, marks a fundamental shift in the space industry. 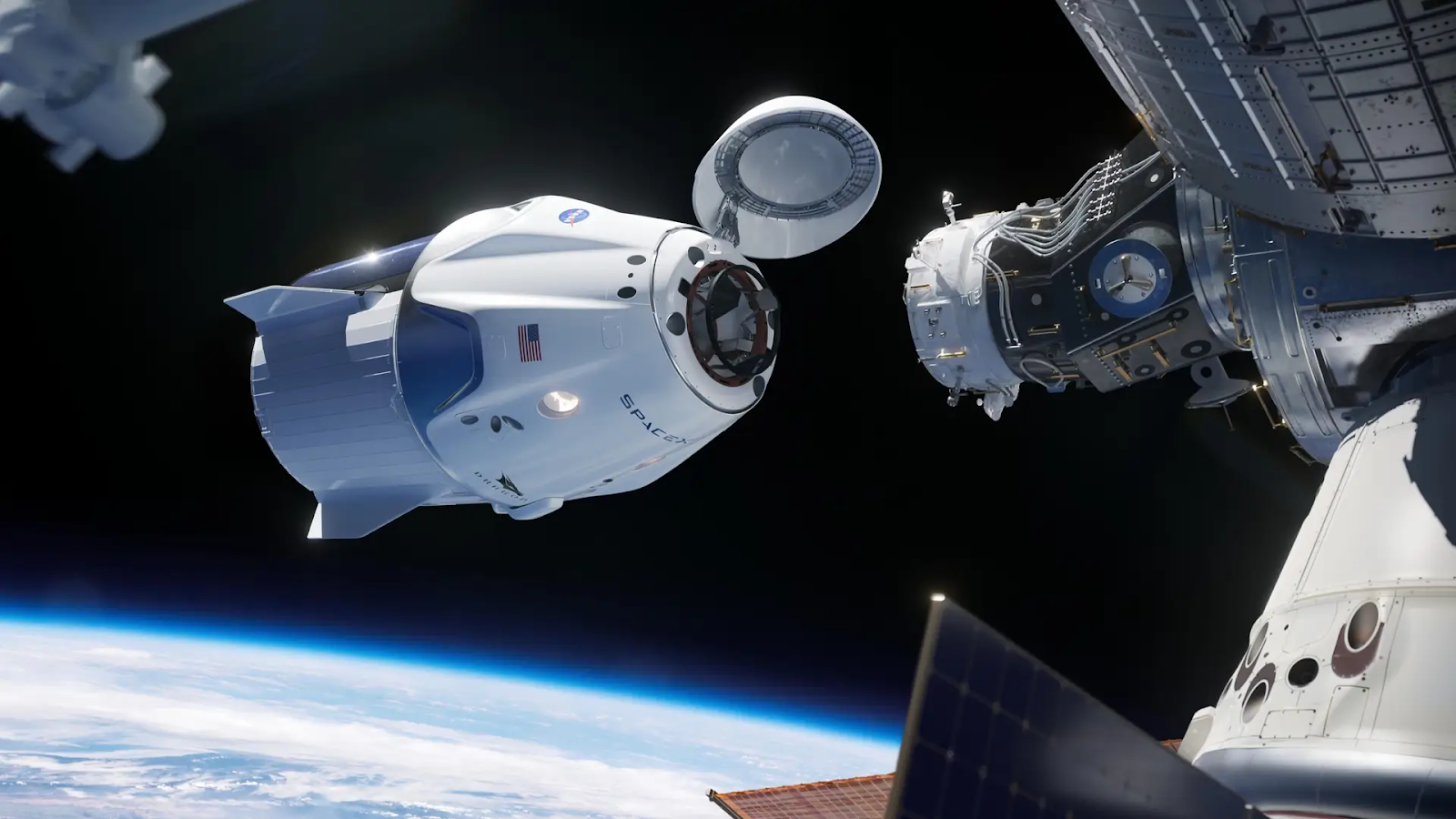 SpaceX’s Crew Dragon capsule completed its 19-hour journey, docking with the ISS on May 31. Image source: SpaceX via NASA.

NASA’s 1969 Moon landing was a monumental achievement for humanity that has since gone unmatched. The space industry’s progress has slowed since the 1980’s. NASA shut down the Space Shuttle program in 2011, and since then American astronauts have been hitching rides on the Russian Soyuz spacecraft in order to access the ISS. That is, until this past May. 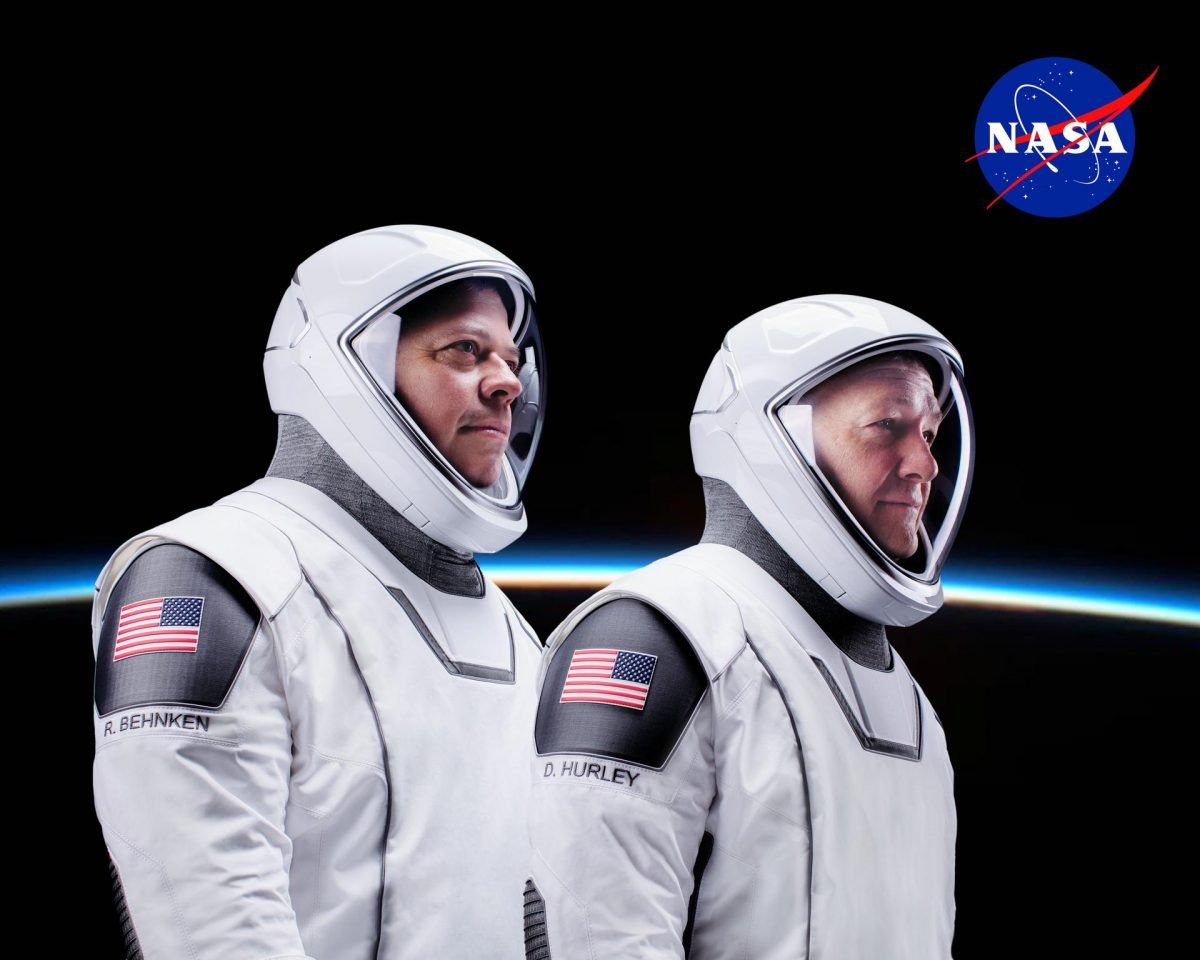 Why has the American space industry suddenly come to life after a period of such sluggishness? The answer is affordability.

Prior to this century, the only major players in the space industry were state-sponsored agencies, who built new rocket boosters for virtually every launch. Companies like SpaceX, Blue Origin, and Rocket Lab are changing that pattern by reusing boosters. In fact, on June 3, SpaceX landed one of its Falcon 9 boosters for the fifth time. Similar to how the airline industry sells reasonably-priced passenger tickets by reusing planes, a more sustainable space industry is emerging as a result of reusable rockets.

These savings are evident in the price of launches. Prior to this year’s Crew Dragon launch, NASA had been paying $90 million per person to hitch rides on the Russian Soyuz spacecraft. Compare that to $55 million per person on SpaceX’s Crew Dragon. On NASA’s Space Shuttle, sending one kilogram of cargo to space cost $54,500. SpaceX’s Falcon 9 rocket can do the same thing for $2,720.

Since SpaceX has developed reusable rockets that can fly for cheaper than NASA’s own rockets, NASA has become one of their customers. Prior to the Crew Dragon launch, NASA Administrator Jim Bridenstine commented, “We expect SpaceX to go get lots of customers that are not us. And that’s going to drive down our costs. And we want to have not just SpaceX, but other providers that are competitive on cost, on innovation, on safety; basically creating this robust marketplace in space.”

Since the 1960’s, government entities and large private companies have paid to launch satellites in order to provide services ranging from GPS, to internet connectivity, to astronomical observation. As space becomes increasingly affordable, smaller companies gain access to the industry. SpaceX even has a new web-based interface for companies to book launches.

Now that space is more accessible, there is a lot of money to be made. Currently, the space industry generates around $350 billion in revenue annually. By 2040, that number is expected to increase to $1.1 trillion. A wide variety of commercial projects are now possible, including internet service, tourism, manufacturing, and fuel infrastructure.

Starlink is SpaceX’s venture to provide affordable, high quality internet access around the world. SpaceX uses its own rockets to launch the requisite satellites to low Earth orbit, and mitigates this setup cost by conducting combined launches for their Starlink satellites and other customers’ hardware. SpaceX’s goal is to assemble a constellation of satellites to provide coverage everywhere on Earth. The company has almost 500 Starlink satellites in orbit already.

Companies like Blue Origin and Virgin Galactic are planning to send tourists to orbit. Blue Origin previously targeted this year for its first passenger flights, but has not made any recent announcements about its timeline. Virgin Galactic, which made headlines in 2018 with its midair spaceplane launch, is set to reveal the cabin interior design of its SpaceShipTwo craft later this month. SpaceX plans to fly its first private passenger around the Moon in 2023.

NASA is committed to returning to the Moon by 2024 with its Artemis program, and it intends to land the first woman on the Moon in the process. In April 2020, NASA selected three companies to build their proposals for a system to land astronauts on the surface of the moon: SpaceX, Dynetics, and the Human Landing System National Team led by Blue Origin. 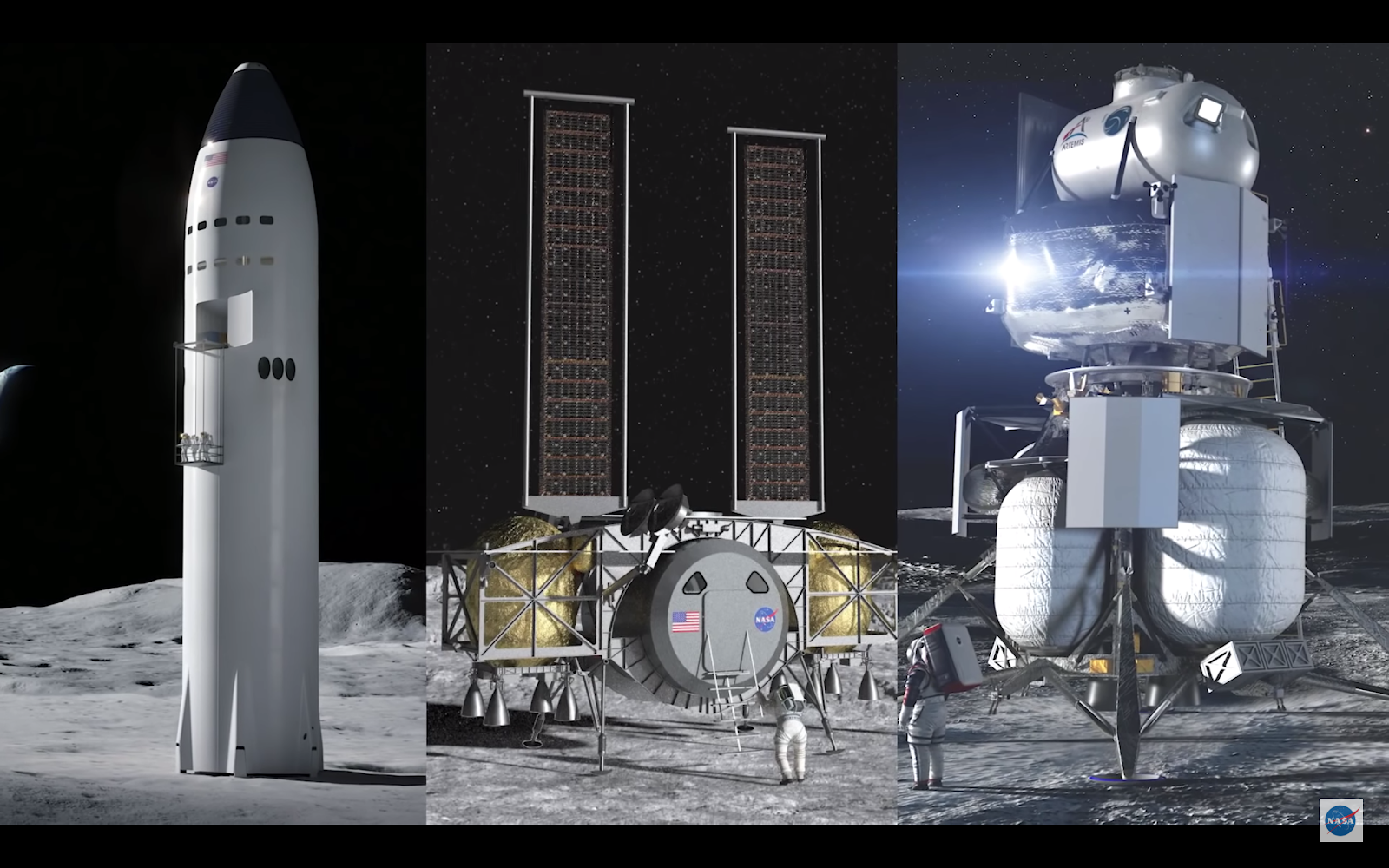 Escaping Earth’s gravity requires an enormous amount of energy, and perhaps the greatest obstacle to affordable space travel is the cost of sending fuel into space. Currently, a rocket needs to carry all of the fuel it will need for its mission with it during its ascent from Earth’s surface. Extra fuel makes a rocket heavier, which in turn requires even more fuel to propel the craft and its cargo.

Off-Earth fuel production overcomes this obstacle. Rockets can use hydrogen and oxygen as fuel. Water, which is made up of hydrogen and oxygen, can be separated into these components through a process called electrolysis. Thus, the presence of water on asteroids or other celestial bodies would allow these locations to serve as fuel stations.

Space agencies have already rendezvoused with asteroids. In 2018, the Japanese probe Hayabusa2 sampled the interior of an asteroid called Ryugu. NASA’s OSIRIS-REx spacecraft has been following an asteroid named Bennu since 2018 and plans to collect surface samples in October 2020.

Asteroid mining could become a multi-trillion dollar industry, and there has been speculation that it could produce the first trillionaire in history. 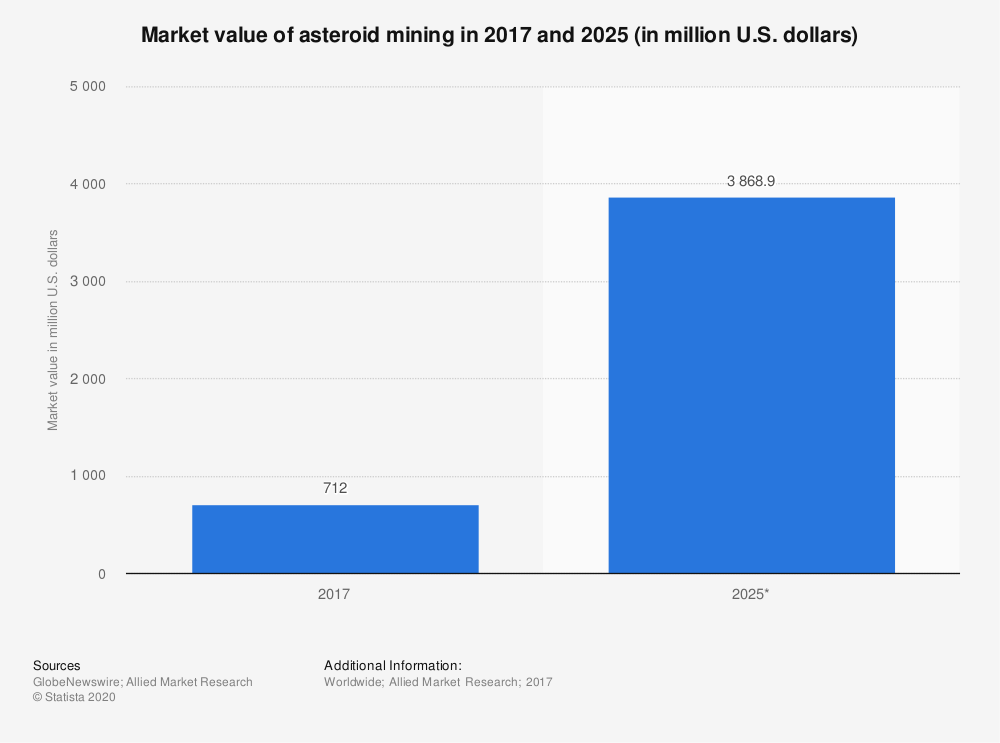 “The ISS right now is being used to create the commercial markets of the future for microgravity, whether it’s pharmaceuticals, immunizations, printing of human organs in 3D, advanced materials, artificial retinas,” says Bridenstine.

The zero-gravity, ultra-cold environment of space enables manufacturers to take advantage of designs, materials, and techniques that are impossible on Earth. Besides creating products and materials for use on Earth’s surface, in-space manufacturing also provides a sustainable solution for resupplying extended missions in space.

In 2016, NASA partnered with Made In Space, Inc. to test 3D printing aboard the ISS, and, in 2019, awarded the company $73.7 million to test assembly of spacecraft parts in orbit. That mission, called OSAM-2, is set to launch aboard Rocket Lab’s Electron rocket in 2022.

SpaceX plans to use its Starship rocket to send cargo missions to Mars by 2022, with the ambitious goal of sending crewed missions in 2024. The company has also explored using Starship for rapid Earth-to-Earth travel and has been developing offshore spaceports. In addition, there are talks for Tom Cruise to film a movie on the ISS.

The potential of a revitalized space industry is undeniable. However, innovators will face significant challenges along the way. 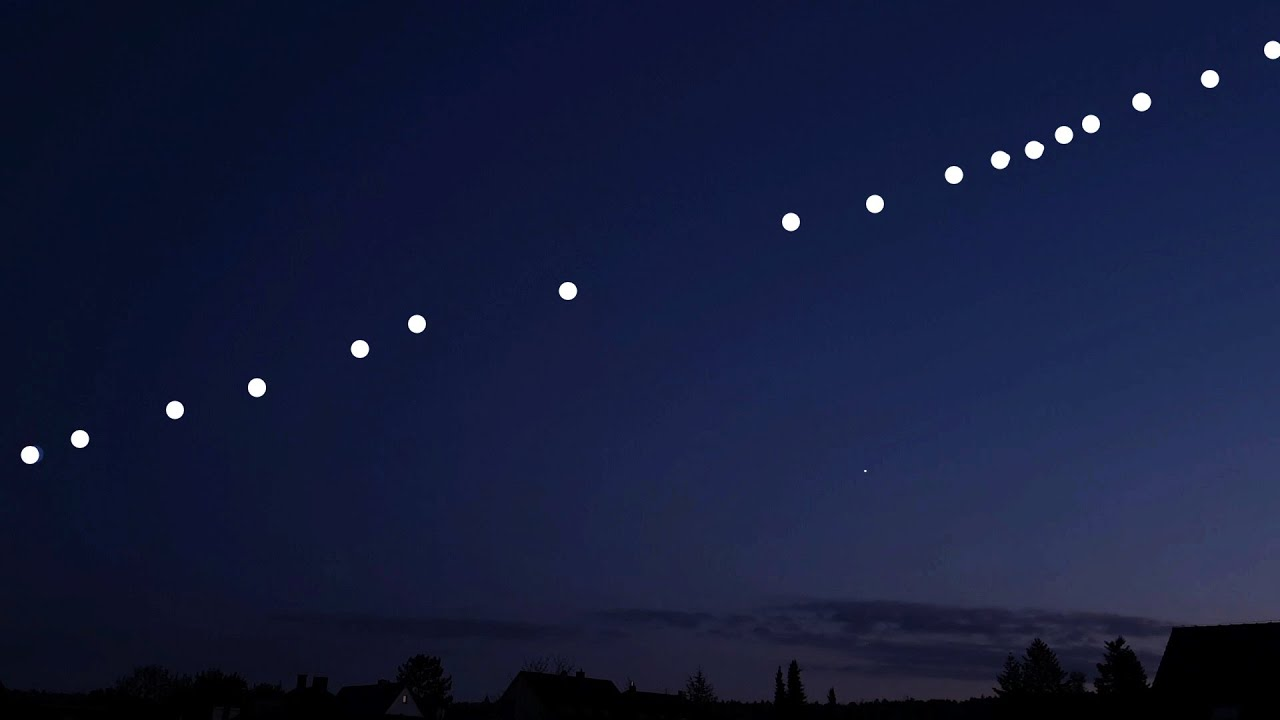 With more satellites in low Earth orbit, astronomers are finding it increasingly difficult to observe other objects in the night sky. This problem is caused by satellites’ reflection of sunlight toward Earth. SpaceX has committed to equipping all of its satellites with visors to reduce their reflective qualities, and the company launched its first such satellite on June 3, 2020.

Spacecraft have been leaving debris in orbit since the beginning of the space age. This space junk includes discarded rocket boosters, loose screws, flecks of paint, and spare parts. In orbit right now, there are over 18,000 nonoperational satellites as well as over 170 million small pieces of debris.

Left unchecked, orbital debris could knock out essential satellites and pose a risk to future missions. Moreover, when objects collide in orbit, they shatter into fragments, thereby increasing the chance of additional collisions.

Luckily, the space industry has recognized the need for sustainable development in orbit and is taking steps to clean up space junk. Agencies are already tracking debris, and others have designed harpoons, nets, and magnets for capture and removal. Companies like SpaceX have also committed to producing satellites which deorbit themselves at the end of their lifespan.

The foundation of international space law is the 1967 Outer Space Treaty (OST), which provides in part that space “shall be the province of all mankind,” and “Outer space, including the moon and other celestial bodies, is not subject to national appropriation by claim of sovereignty, by means of use or occupation, or by any other means.” This framework could hinder growth by casting doubt on commercial actors’ claim to territory and resources in space.

In 2015, Congress passed the SPACE Act, which explicitly allows U.S. companies to “engage in the commercial exploration and exploitation of space resources.”

The rise of the commercial space industry involves a mix of public and private actors who have a variety of interests at stake. As space becomes more crowded, national laws like the SPACE Act may come into conflict with the OST. Eventually, the international community will need to update its legal framework to function within this more robust marketplace.

A recurring criticism of the space industry is its disconnection from Earth’s surface. When the U.S. allocates money to NASA, many are quick to ask why that money is not instead used to benefit people on the ground. Some have suggested that 2020 is a particularly inappropriate time to celebrate progress in space due to the turmoil currently gripping the world in the form of a pandemic and civil unrest.

The commercial space industry is not contingent on public opinion in the same way as governmental entities. NASA, for instance, requires political support to receive the funding it needs. Commercialization brings the freedom to pursue profit-driven projects that are independent from public opinion and political agendas.

On the other hand, public opinion could still affect the space industry through government regulation. And state agencies like NASA, still beholden to political administrations, remain core players in the industry for the time being.

Commercialization of the space industry drives down costs and opens the door for development. Although there are challenges ahead, the industry promises to meet them with innovative solutions. As noted by Bridenstine, this pattern has been present throughout history: “When we think about when people came to the New World, and then they expanded west, they expanded west with a purpose. They were seeking commerce. The railroad got put into place for a purpose; it was put there for commercial reasons. And that’s where we are right now at the dawn of this new era of space flight.”

SpaceX’s Crew Dragon launch is just the beginning of this new era. With so many exciting projects in the works, the question is not whether there will be a commercial space industry, but rather how large it will become and how rapidly it will grow.

Thomas Duff is the Chairman of the Eagle Institute Board of Directors and a student at Boston College Law School. Contact him with questions or comments at thomas@eaglemunc.org.

View all posts by Thomas Duff