Russia is on an influence campaign through Africa. Over the past decade, Russia has sought to build relations and establish a strategic presence by means of a unique diplomatic tool: nuclear power. In the last five years, Russia has successfully engaged with eight African countries, signing agreements with Ethiopia, Egypt, Sudan, Kenya, Uganda, Nigeria, Zambia, and Ghana to provide them nuclear technology and developmental resources. Key to Russia’s growing access to the African continent is Rosatom, a Russian state run nuclear energy corporation.

Founded in 2007, Rosatom operates with dual motives. As a company, it strives to maximize profit by securing large, lucrative contracts. As an instrument of the Russian state, Rosatom receives direction from on high to secure geopolitical goals through nuclear cooperation agreements even if those deals fall short of providing beneficial income. As a functionary for the Russian government, the company has significant advantages in earning contracts against foreign competitors. Beyond receiving direction from the government, Rosatom benefits from Russia’s ability to provide credit to countries that struggle to finance their extremely expensive nuclear purchases. Private companies like American contractors General Electric and Westinghouse lack such an edge. Rosatom’s state-like tool belt and Africa’s crippling power scarcity provide the opportunity for Russian infiltration.

Russia’s first attempt to go nuclear in Africa fizzled, however. The state began its present campaign in South Africa in 2014 when Rosatom signed a deal with Eskom, the South African state-run energy company. Eskom wanted to add 9600 MW (the equivalent of about 10 reactors) of nuclear provided electricity, an attractive opportunity for more than just Russia. South Korea, China, France, and the American based Westinghouse were also seeking a hearty helping to the deal. None, however, were as well equipped to attract South Africa as Rosatom. At the time, both South Korea and China had limited experience in foreign reactor construction, France (which built South Africa’s first nuclear power plant) was reorganizing its own state led nuclear utility, and Westinghouse was in the midst of chapter 11 bankruptcy. Eskom claimed Russia was not a frontrunner, but internal corruption kept talks and details behind closed doors. Russia aimed to use this corruption to its own advantage and forge an agreement on its own terms but ultimately failed to bypass South Africa’s political checks and balances.

Suspicious of the secretive deal, the public and concerned environmental groups challenged Eskom and pushed their government for answers. The South African court responded to the clamor and weighed in. It ruled to invalidate the deal due to the lack of public consultation and an absence of proper environmental and financial assessments. In his decision, Judge Bozalek said,

“Seen as a whole, the Russian IGA stands well outside the category of a broad nuclear cooperation agreement, and at the very least, sets the parties well on their way to a binding, exclusive agreement in relation to the procurement of new reactor plants from that particular country.”

Russia decided to wheel and deal in a corrupt process to secure an agreement that would have excluded other foreign parties and even put Eskom at the disadvantage, but by doing so they came under the scrutiny of the South African public. Russia emerged empty handed, yet its first nuclear adventure in Africa demonstrates the state’s power motivations and the methods with which it reaches those ends.

Today, despite its initial failure, Rosatom has made significant progress in Africa, and Egypt represents one of the corporation’s most tangible achievements. In 2017, Russia and Egypt signed an agreement finalizing a deal commissioning Rosatom to build the El Dabaa nuclear power plant in the northern Dabaa region of the country, renewing a partnership begun in 1954 when the USSR agreed to provide Egypt a research reactor. Rosatom began work on the energy facility in February of this year, and, once complete, El Dabaa will be the only commercial nuclear power plant outside of South Africa, fulfilling President Vladimir Putin’s and his political predecessors’ long-held aspirations for the region. 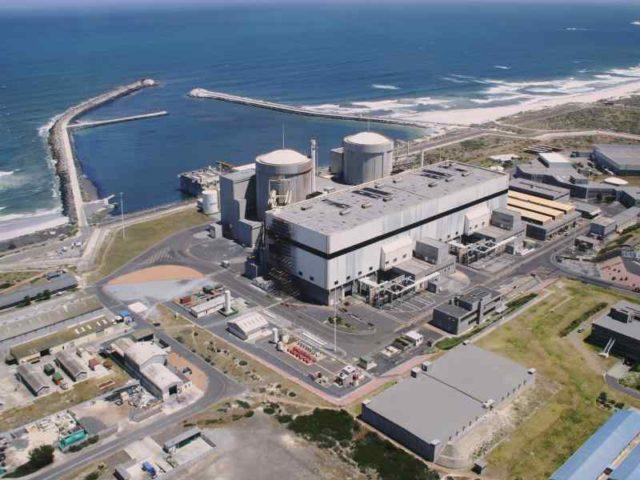 South Africa’s Koeberg Nuclear Power Plant is the only commercial nuclear power plant in all of Africa. It was built by the French beginning in 1976. Both units were online by 1985. Image Source: ESI-Africa

Nuclear power plants are not like other energy options; the time from project proposal to completed construction can take upwards of a decade (and much longer under bad management). In contrast to coal, oil, and renewables, nuclear plants require constant professional supervision and upkeep from the experts who build them. Nuclear facilities overwhelm their competitors on the complexity metric, necessitating involved, rigorous training of plant operators. Nuclear waste – the extremely radioactive by-product of fissioning reactions – is also a burden often left to the contractors. Waste requires treatment and storage, a highly technical procedure. Finally, nuclear power plants have lifetimes of several decades, and owners can easily extend them for decades more. When building a nuclear reactor, a country must commit to a century long dedication that begins with project conception and only ends with complete plant decommissioning.

Yet in the case of Egypt, this is not just a commitment to its soon-to-be nuclear plant, it is a commitment to Russia. Anxious to develop an alternative, powerful electricity source for domestic production, Egypt bound itself to a state on whose technical expertise and resources it must rely. With the plant project now fully reviewed and approved by the International Atomic Energy Agency (IAEA) and a $25 billion loan from Russia to finance construction, Rosatom has effectively guaranteed Russian presence in Egypt today with a long future to come.

Egypt’s power plant will likely not be repeated in Africa soon. Not all countries garner the coveted approval of the IAEA for a commercial nuclear foray. At its core, the international nuclear agency promotes the safe, regulated use and proliferation of nuclear technologies, and while it’s always eager to recommend nuclear power as a solution to energy problems, the IAEA maintains a list of criteria a state should fulfill to use it. In addition to enjoying a sturdy supply of qualified experts, a country must also have the infrastructure to support the significant base power load a nuclear power plant provides. The IAEA recommends nuclear aspiring countries have a grid capacity 10 times that of any proposed reactor. For many African states, this is a goal on a faraway horizon. 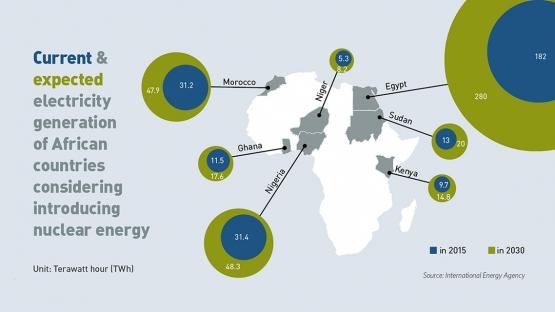 For instance, Rwanda offers no prospects for commercial nuclear companies. With an insufficient energy grid and a dearth of nuclear professionals, Rwanda currently lacks the ability to sustain, let alone finance, a nuclear power plant. Enter Rosatom, a nuclear power plant with motives beyond profit. Overseen by the state, Rosatom faces pressure to aid in the country’s aims for international influence. Even when deals taste sour on the economic front, Rosatom contracts can still offer payoffs in the currency of power. In Rwanda’s case, long term goals offer a long-term presence, though they may come at the price of a significantly delayed return on Rosatom’s investment.

In 2018, Russia and Rwanda began their nuclear relationship when they signed a cooperative agreement for the peaceful use of nuclear power. The agreement establishes a roadmap for the development and construction of a nuclear research center (CNST) in Rwanda with Russian designs, labor, and expertise. In May and October of 2019 two other agreements were signed further cementing the nations’ commitment to CNST and binding Rwanda to Russian resources and know-how. The agreements expanded on the features of CNST which will include six multi-purpose sections that specialize in areas like nuclear medicine and radiobiology. CNST will also house a Russian designed 10 MW research reactor, a feature on which the rest of the center depends. On June 15, 2020, Rwanda’s Chamber of Deputies ratified these agreements, greenlighting the project and committing the African State to Rosatom for the coming decades. 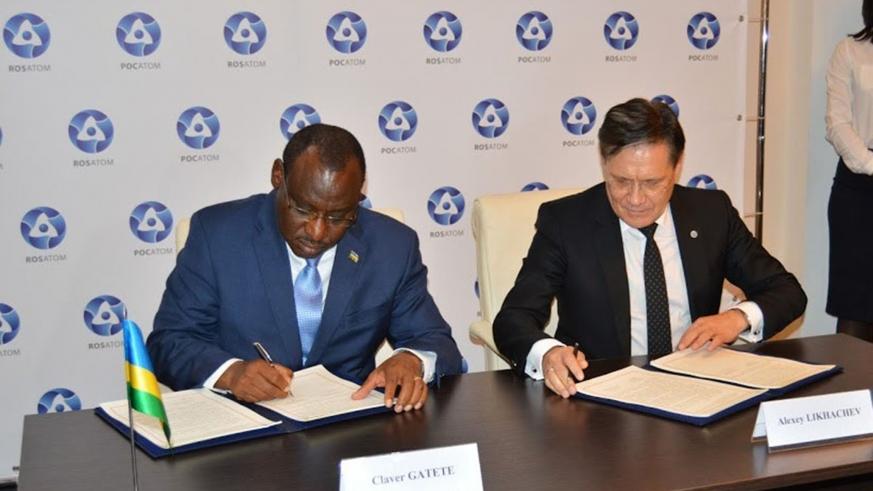 Egypt and Rwanda occupy but a fraction of Russia’s nuclear ambitions in Africa. Nigeria, supporting a population where almost half have no access to electricity, signed an agreement with Rosatom in 2017 for the construction and operation of a nuclear power plant and research center. About Nigeria’s hopes, Simon Pesco Mallam, the chairman and CEO of the Nigeria Atomic Energy Commission said, “We have a [nuclear] roadmap and that is by the mid 2020s. We hope we can get a commercial plant and add three more in 5 to 10 years.” Though shy of a commercial reactor commitment, Rosatom has signed agreements with both Uganda and Zambia establishing nuclear research partnerships that all three countries hope will eventually lead to full scale nuclear power.

Russia’s campaign isn’t just at work in Africa. The entire strategy is global in ambition. In the European theater, Russia desires the same soft power ends, but it leverages a different foreign weakness. Where African states are “vulnerable” because of their aspirations for energy accessibility and security, Russia’s European targets seek to end their reliance on foreign oil. The solution? Trade oil for a Rosatom reactor. And the irony that permeates it all? They’re trading Russian oil for Russian reactors. Russia is providing a solution to which it itself is the problem.

In the age of acknowledged climate change, the majority of the world’s countries, as signers of the Paris Climate Agreement, have signaled their decisions to reduce carbon emissions. As the effects of global warming become more severe, the push for alternative electricity sources accelerates. Rosatom offers the services of the future, supplying a base load power source that can replace fossil fuel use, and it’s also providing full, dedicated servicing for the entire lifetime of their purchased products. Russia uses Rosatom to respond and adapt to an evolving energy market. Countries like Turkey and Belarus are eager to take Russia up on the chance to trade in one dependence for another.

In 2018, Rosatom announced it had contracts to build 22 nuclear reactors in nine countries over the next decade. This number has grown as construction contracts progress in Africa, and the tally does not represent nuclear cooperation agreements like in Rwanda where, for now, only a Nuclear Centre is commissioned. Among the states joining Rosatom’s roster for reactors are Hungary, Finland, and India. 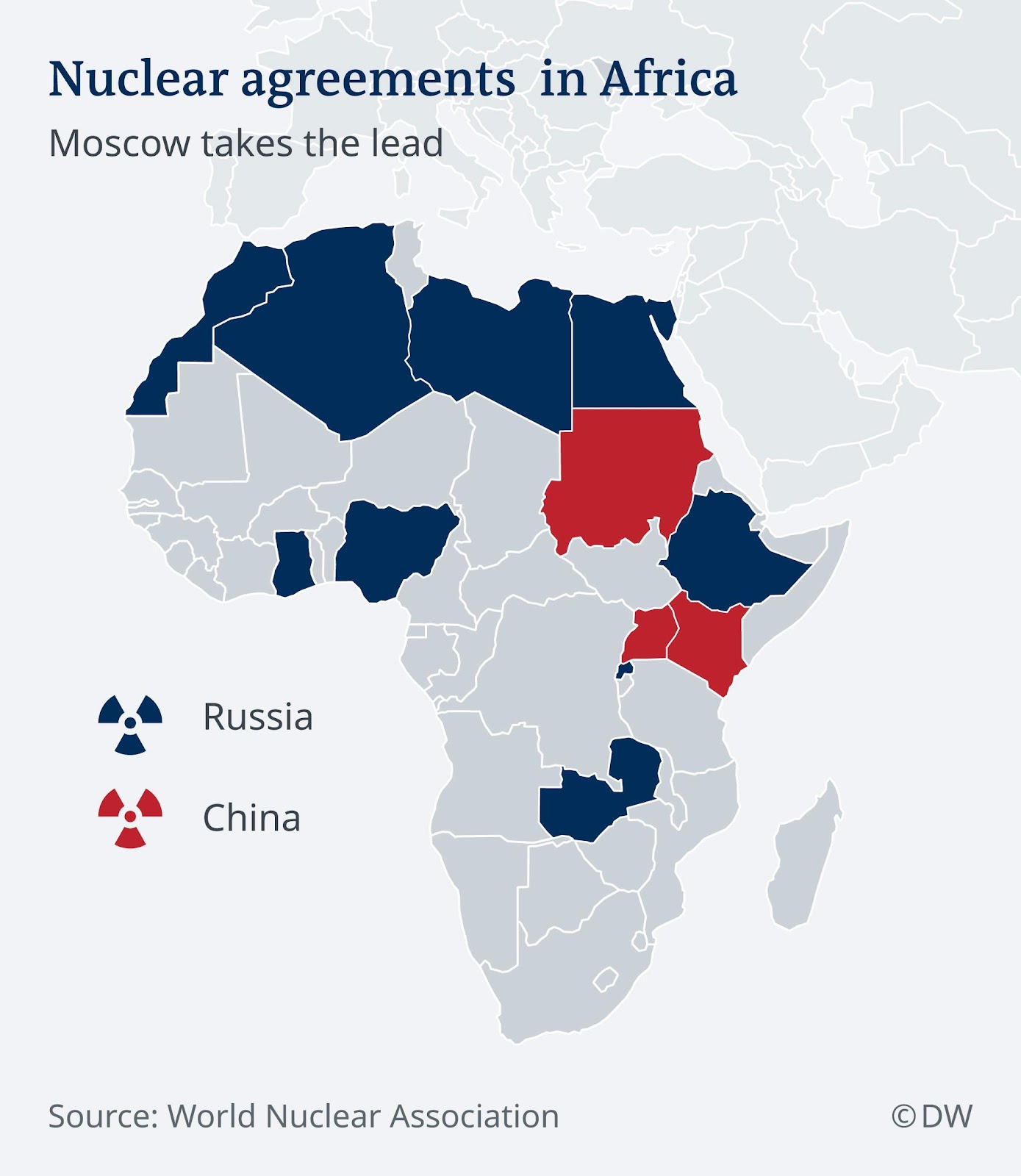 The end of the Cold War fundamentally changed nuclear strategies. Atomic weapons still induce a nasty dread, but fears of a nuclear winter have significantly dissipated since the 1980s. Today, Russia has exchanged the hard power coercion of nuclear bombs for the soft power caress of nuclear reactors, and it’s leaving its traditional competitors far behind. Gone are the days of the peculiar giants like Robert Oppenheimer and self-proclaimed H-bomb extraordinaire Edward Teller who once dominated the international nuclear conversation for the United States. While the US still enjoys a healthy stock of eccentric government characters, they no longer play any roles alongside this new cast of global actors on an evolved stage. China too is playing this international game and has seen fast success both in Africa and abroad. Together, with their adversaries from the old western bloc unwilling or unable to engage, Russia and China are on a rise towards a global nuclear duopoly. It’s always been about power, but, this time, it’s literal.

View all posts by Nicholas Stubblefield