Exploring the Death Penalty in America and Abroad

On July 14, 2020, the Supreme Court of the United States allowed for the first federal prisoner execution in seventeen years. Hours earlier, a federal judge delayed the execution due to an outstanding constitutional question regarding the injection to be used in the execution. However, in a 5-4 decision, the Court ruled that the plaintiffs in this case did not make “the showing required to justify last-minute intervention by a Federal Court,” and vacated the federal judge’s injunction to delay the execution.

While five Supreme Court Justices voted in favor of advancing the execution, four justices dissented. These Justices emphasized the difficulty of administering federal executions while staying in line with the Constitution. Justices Ginsburg, Sotomayor, and Kagan warned about the consequences of rushing a decision of this magnitude. This month’s ruling forever strips this plaintiff of bringing any future constitutional challenges.

The plaintiff in this case was Daniel Lewis Lee, a 47-year-old convicted of torturing and killing a family of three in 1996. He is the first of four individuals with scheduled executions, and the Supreme Court’s decision sets a clear pathway for these other executions to proceed. 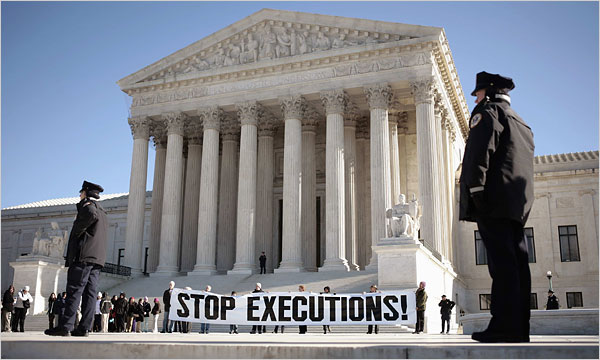 Protesting the death penalty outside the United States Supreme Court in 2007. Source: The New York Times

Breaking Down the Death Penalty

The death penalty, otherwise known as capital punishment, is a possible sentence one may receive after being convicted of murder. States may establish additional circumstances for the death penalty to apply.

As of June 11, 2020, the death penalty is legal in twenty eight states. In these states, lethal injection is the primary method. If at the time of an execution the injection is deemed unconstitutional or unavailable then some states allow for alternative methods that include: electrocution, lethal gas, hanging, and in three states, by firing squad. The Supreme Court has never found a particular method to be unconstitutional, though some states have. For example, Georgia and Nebraska have ruled that carrying out a death penalty sentence by electrocution is unconstitutional as it is a cruel and unusual punishment. A majority of states have not addressed this particular constitutional issue, but have still used legislation to outlaw all methods other than lethal injection.

The Case Against the Death Penalty

A common argument against the death penalty is the assertation that capital punishment violates the fifth, eighth, and fourteenth amendments of the Constitution. The eight amendment protects individuals from “cruel and unusual punishment” from the government. The current argument is the use of the drug pentobarbital in an execution should be considered cruel and unusual punishment because it allegedly causes medical complications upon administration.

The fifth and fourteenth amendments grant individuals equal protection under the law, and protects individuals from the deprivation of life, liberty, and property without due process. Not all people who get sentenced to the death penalty actually face execution. The others are subject to carrying out their sentences on “death row” where they remain for the duration of their life. This decision is left up to the state, resulting in unequal treatment under the law. Additionally, wealthier individuals are less likely to be sentenced to the death penalty because of the vast resources they have access to throughout their trial.

Because of the state laws governing capital punishment, there are large disparities in executions by region throughout the country. While there have only been four executions in the Northeast since 1976, there have been 1,244 executions in the South since then, and 570 in Texas alone. Furthermore, between the years of 1930 and 1996, more than half of the prisoners executed were Black, despite Black people only making up 12% of the United States population in 1990. This imbalance clearly produces an unequal treatment and outcome under the same law, and some argue this is enough to bring a constitutional claim.

Furthermore, those who face execution are denied due process, the principal of fair and equal treatment of the law. The constitutional guarantee of due process ensures the government follows all procedures set by statutes and court practices. This punishment is irrevocable, setting it apart from all other punishments an individual could face. There is no opportunity for an executed individual to present new evidence related to his or her case or from benefiting from a new law that may alter the conviction or sentence.
For those concerned with the burden high crime rates puts on tax payers, sentencing someone to the death penalty costs significantly more than sentencing someone to life in prison. On average, the cost through the end of an execution is $1.26 million, while the median cost of a non-death penalty case through the end of incarceration is $740,000. Since reinstating the death penalty in 1976, the state of California has spent more than $4 billion on death penalty cases. A majority of the difference comes from the cost of the trial itself when a prosecutor seeks the death penalty versus cases when the prosecutor does not. Heightened spending on death penalty cases takes resources away from communities, especially ones that could be used for crime prevention, education, mental health treatment, or victims’ services. 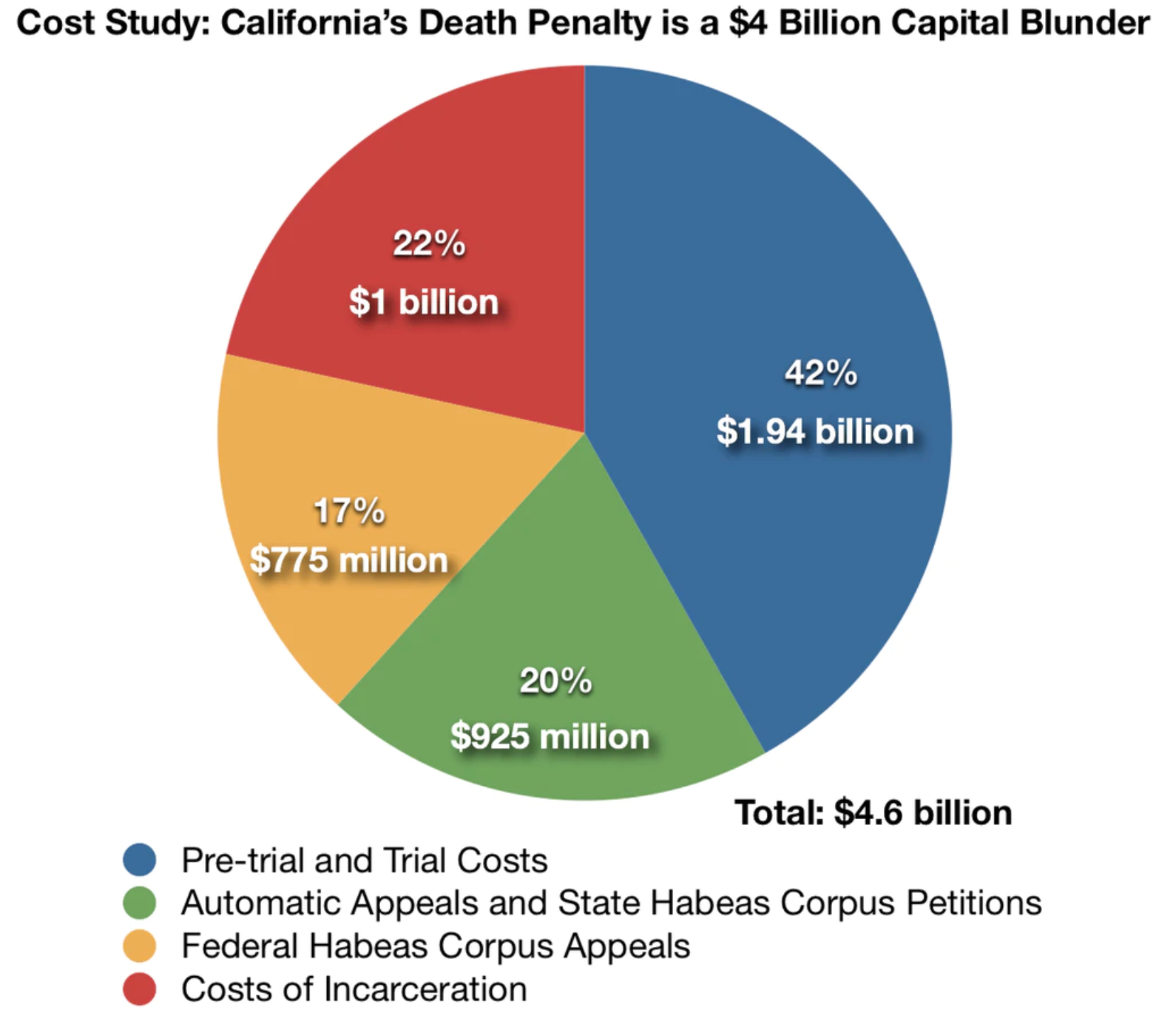 Capital Punishment Across the Globe 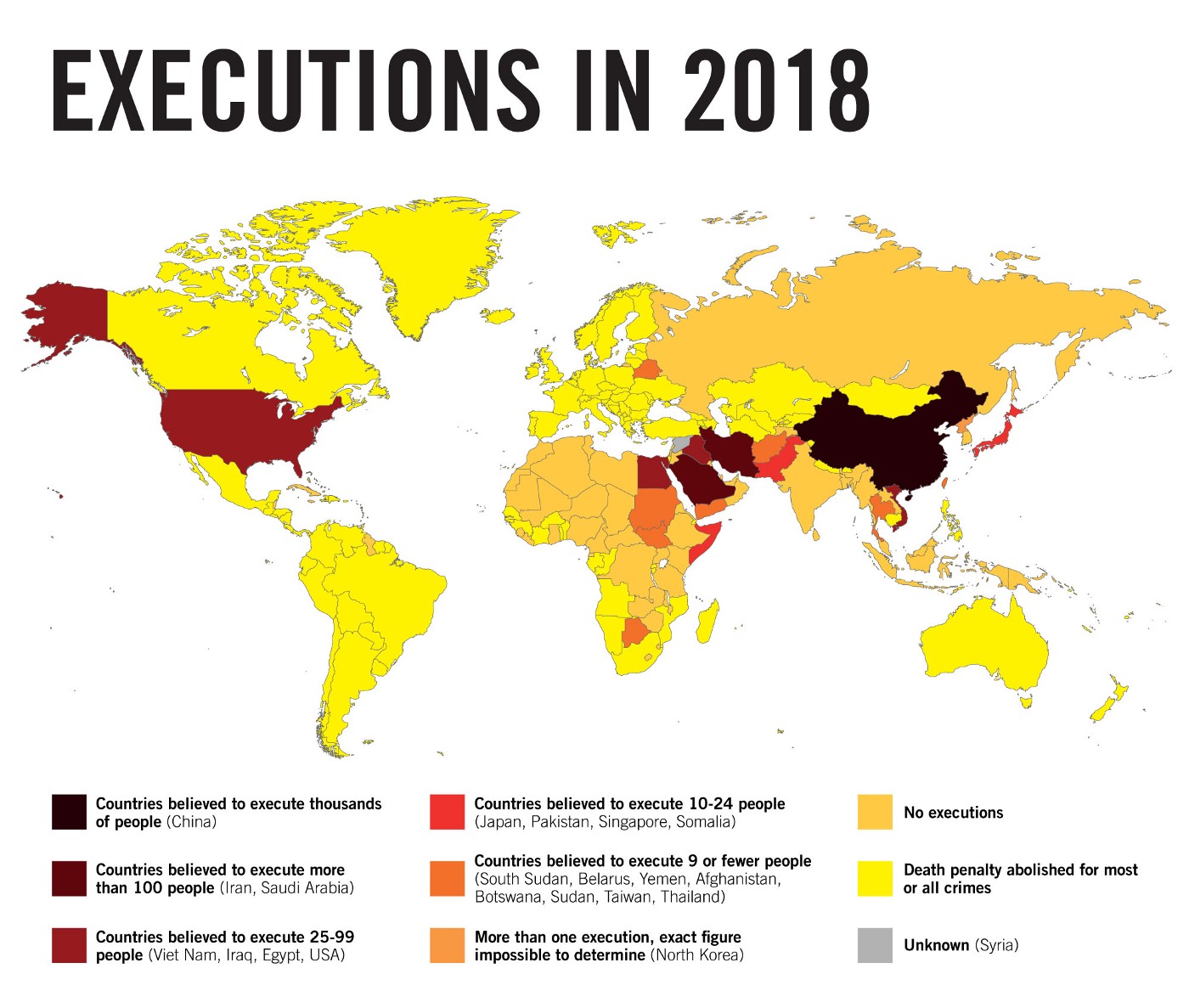 View all posts by Taylor Cerwinski