COVID-19 in the Occupied Palestinian Territories 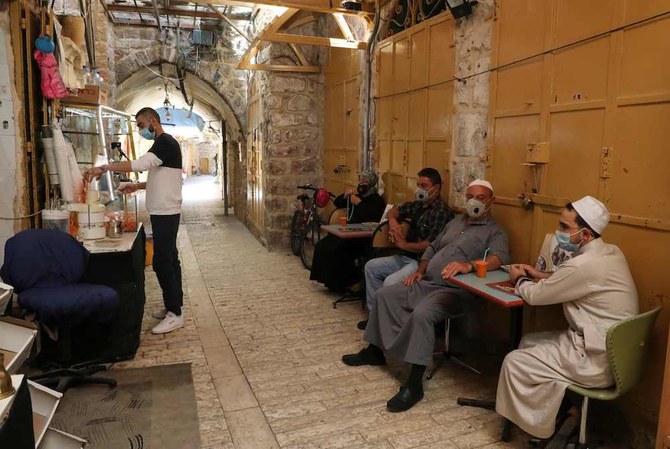 Areas of conflict and in need of humanitarian assistance are constantly depleted of basic resources such as water and sanitation services. As COVID-19 spreads, the disadvantaged populations in these areas are particularly in need of attention and relief aid. Without any legal protection from a state, refugees are some of the most vulnerable people affected by the realities of the virus. The increasing inability of health officials to effectively target the pandemic is due to weak healthcare systems and fragile socioeconomic conditions. Widespread poverty, instability, and limits on free movement make the occupied Palestinian Territories one such region of concern. The difficulties Palestine is facing today are threefold: a rapidly spreading virus (COVID-19), an ongoing political conflict (Israeli occupation), and a systematic inability to legislate (physical and ideological Palestinian division). With approximately 37.7% of Palestinian refugees living in camps inside the Gaza Strip and the West Bank— comprising about 50% of the population of those areas—over-crowding and inadequate basic infrastructure impede the prospect of meeting any health standards such as social distancing and proper sanitation.

Evident in the 27 overpopulated refugee camps in the Gaza Strip, West Bank and East Jerusalem, the number of internally displaced Palestinians increases each year as a result of Israeli occupation policies. Israel’s thirteen-year blockade of Gaza and draconian restrictions on movement to and from the territory by  Israeli occupation authorities (IOA) has resulted in a high population density of two million Palestinians living in the 140 square mile Gaza Strip. In Area C of the West Bank, which constitutes 60% of the West Bank and where Israel maintains full civil and military control, severe building restrictions have allowed only 3% of travel permits to be granted to Palestinians since 2017. Moreover, routine home demolitions in Area C and East Jerusalem have torn down at least 61 buildings and displaced at least 50 people since March 2020 when the virus began to spread in Palestine. All of these factors contribute to the Palestinian incapacity to comply with the most basic and critical preventative measures. Poor housing leads to bad sanitation which leads to ill health and a higher risk of contracting COVID-19. Additionally, the unreliable health system creates a financial drain on families who seek treatment, plunging them even deeper into poverty.

Water, sanitation and hygiene (WASH) systems are poor in Palestine, especially in refugee camps. Due to complete Israeli control of water resources, water is scarce for Palestinians. In the Gaza Strip, for example, 96% of water from its only aquifer is unfit for consumption. Further, a 38.5% unemployment rate among Palestinians and a 38.7% poverty rate among refugee households impacts refugees’ ability to take preventative measures including buying disinfectants. Access to safe water is dependent on consistent and reliable availability of electricity since clean water in Gaza first requires the desalination of seawater. The energy crisis in Gaza results in just a few hours of electricity a day and thus affects the ability to clean, cook, and drink water, as well as to dispose of wastewater safely. Additionally, problems arising from the prohibition on entry of ‘dual-use’ materials, inadequate power supplies and lack of government regulation have seriously affected the WASH situation in Gaza. Most Palestinian communities in Area C are not connected to the water network or are irregularly supplied by it, forcing people to rely on expensive tankered water that some cannot typically afford. Most problematic is the difficulty through which building permits are granted. As a result, destruction of essential WASH infrastructure lacking building permits leads to displacement, poverty and increased risk of contracting the virus.

An estimated 190,000 Palestinian refugees live in 19 refugee camps in the West Bank as a result of the 1967 Six-Day War in which Israel seized the West Bank from Jordan. In al-Amari, a refugee camp near Ramallah, 8,000 people live packed into one square kilometer (0.39 square mile). Although the United Nations Relief and Works Agency for Palestine Refugees in the Near East (UNRWA) is tasked with the alleviation of struggles of Palestinian refugees, the UN agency is struggling to accomplish its duty because of its financial troubles. In 2018, the United States, the agency’s primary donor, ended its annual financial aid of $300 million. Due to the additional burden of COVID-19, UNRWA has called for increased support and emergency aid from its other donors. The lack of support has impelled the residents of al-Amari to take matters into their own hands by standing at the camp’s entrance and taking the temperature of everyone entering the camp. Refugee camps are of high concern because “it is impossible to implement distancing and prevent contact between the sick and other residents,” says Nael Nakhleh, a member of an emergency committee that was set up at another camp near Ramallah. 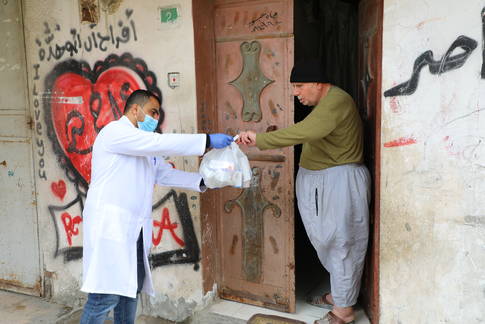 Multiple journalists have engaged in a pressing discussion over who is responsible for managing the virus in Palestinian refugee camps. Some delegate the responsibility to Israel: under international law, Israel, as an occupying power, has special obligations to the population under its control including a duty to protect. This obligation was reinforced by “Israel’s decision after the 1967 war not to grant citizenship and equal rights in the Jewish state to the Palestinian population of the West Bank and Gaza, even in return for Israel’s permanent retention of the occupied territories.” However, the caveat of international law is the absence of an established compulsory judicial system or enforcement agency. An external power that is able and willing can compel a state to abide by international law by establishing economic, diplomatic, or military sanctions. The United States exerts an unparalleled power over Israel through its annual military and financial aid package. Therefore, if Israel is deemed the responsible entity for managing COVID-19 in the refugee camps within its occupied territories, then the United States is the external power that can best compel Israel to dutifully protect the population under its occupation.

UNRWA is another entity that is often designated as the proper manager of the health emergency in the camps. Yet, American withdrawal as a donor has made it almost impossible for UNRWA to carry out its task of caring for Palestinian refugees. The UN High Commissioner for Refugees (UNHCR) is not involved in the protection of Palestinian refugees is due to technicalities in its mandate regarding UNRWA. Following the 1948 Arab-Israeli conflict, the United Nations created UNRWA to carry out direct relief and work programs for Palestine refugees under its mandate area (Jordan, Lebanon, Syria, the West Bank and the Gaza Strip). The agency classifies Palestinian refugees using a unique working definition: persons whose normal place of residence was Palestine during the period 1 June 1946 to 15 May 1948, and who lost both home and means of livelihood as a result of the 1948 conflict; descendants of Palestine refugee males, including legally adopted children, are also eligible for registration. Absent a solution to the Palestinian crisis, the UN General Assembly has repeatedly renewed the UNRWA mandate and as of most recently has extended it until 2023. When the UN established UNHCR and adopted the 1951 Convention Relating to the Status of Refugees, it excluded those falling within the UNRWA mandate from coverage under UNHCR when it stated that the 1951 Convention does not apply to persons who at present receive protection or assistance from agencies of the United Nations other than UNHCR. In effect, UNHCR does not concern itself with Palestinians under the UNRWA-mandate area nor does it count Palestinians under UNRWA’s mandate as refugees because their definition of a refugee differs greatly from that of UNRWA. Thus, Palestinians under the UNRWA-mandate area enjoy fewer protections than other refugees for two technical reasons: 1) UNHCR is not tasked with protecting refugees who are under the mandate of another UN agency; and 2) UNRWA only has a mandate to provide Palestinian refugees with humanitarian assistance, and, unlike UNHCR, does not have a specific protection mandate.

The Palestinian Authority (PA) is often viewed as the responsible entity regarding the health of Palestinians in refugee camps. However, the PA exercises only a limited control over some areas of the occupied bank and generally lacks control over borders and the movement of people. It is also important to note that the Palestinian economy is Israel-dependent: Palestinians lack sovereignty and control over their own resources and the Israeli occupation policy deprives them from building a viable independent economy. The PA’s effort to limit the spread of the disease in the West Bank is thus greatly undermined by workers who travel to and from Israel. Even if the PA had the resources to control the labor traffic for all 10 official and 300 unofficial crossings between the West Bank and Israel, many of the unofficial crossings are located in Area C of the West Bank where the PA has no control. The incapacity to freely exit and enter into the occupied Palestinian Territories has deeply complicated the Ramallah-based administration’s ability to exert its governing potential over its constituency in the isolated Gaza Strip. Furthermore, the PA is facing a deep financial crisis due to lockdown, the closure of businesses, and, most impactfully, its inability to pay public servants’ salaries because of its suspension of coordination with Israel as a result of Israel’s most recent annexation plans.

The political and humanitarian conditions in Palestine are complex and play a major role in the ability of any entity to manage the outbreaks of COVID-19. Israel’s full control of borders and restrictions on the movement of people and goods has resulted in longstanding shortages of health workers, supplies and essential drugs, particularly in the Gaza Strip. The overstretched healthcare system in the occupied territories suffers from acute shortages of medications, medical equipment, testing kits, Personal Protective Equipment (PPE), hygiene kits, and trained health staff. Deteriorated living conditions in the West Bank, Gaza Strip and East Jerusalem are manifested in severe over-crowdedness, building restrictions and demolitions by Israel, and absence of freedom of movement in addition to over thirteen years of the siege on the Gaza Strip. The same factors that impede Palestine’s ability to control the spread of COVID-19 and demonstrative of the major gaps in the social and public health system of Palestine including social exclusion, inequalities, fragility, unpreparedness, underinvestment, and weakness in governance and cooperation. There is an urgent need to increase cooperation between different health actors, political entities, and humanitarian aid sources in their preparedness and response to COVID-19 including continuous monitoring and evaluation of resources including funds, facilities and services. Collaboration among Israel, UN agencies, and the Palestinian Authority in planning and implementing a health strategy for the occupied Palestinian Territories is the most effective way in which developed measures can ensure that Palestinian refugees are prepared to combat COVID-19 through access to adequate medical care without restrictions on their movement, as well as access to clean water and health supplies such as masks and disinfectants.

View all posts by Sofia Marino